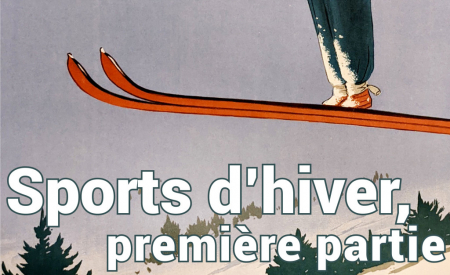 Winter sports,
a new kind of tourism and a new art of living

This week on the Posterissim blog, discover the first article on winter sports, their birth and their stakes: the arrival of a new type of tourism intended for an elite.

In all fields, and we can never say it enough, original vintage posters are the privileged witness of their time. True pieces of history, since their creation, we admire the evolution of our world put into images by the greatest artists of their time. And what more wonderful example than the upheavals brought about by the birth of winter sports?

Indeed, at the very end of the 19th century, a whole new world was offered to discover on the walls of all the train stations in Europe: the magical world of the winter mountains. This was accompanied by a whole new genre of advertising and tourist posters, which closely followed the rapid evolution of this new European dream.

The stakes are incredible and touch all fields: seasonal tourism, railroads and hotels, economy, social life, technology, fashion, sport... The artistic evolution of these new posters is obviously just as exciting.

The craze for cold and snow first took place within the cities themselves. In fact, skating on artificial ice became popular in London in the 1870s before spreading to the rest of Europe and the United States, where the first poster showing winter sports dates from 1896. In France, many works are signed by Jules Chéret from 1876, honoring the Parisian ice parties or the inauguration of the Palais des Glaces.

The incredible adventure of winter sports as we know them today really began in Switzerland at the end of the 1860s. Until then, hoteliers used to try to keep their guests as long as possible at the end of the summer season before closing their establishments until spring. The story goes that the first winter tourists, Englishmen, were invited to stay in St. Moritz free of charge during the winter in order to see the wonders of the winter landscape with their own eyes and to enjoy unheard-of leisure activities such as skating and sledging. Skiing and mountaineering are still relatively confidential activities, only practiced by a handful of daredevils and soldiers, until suddenly, winter sports become fashionable and sometimes even overtake summer tourism. In spite of the chilly beginnings, the off-season comes to life, winter is dead, long live winter!

However, at the end of the 19th century, when the first posters appeared, tourists practicing winter sports were still rare and had to be convinced. At the beginning, it was mainly sledging and skating that attracted tourists to the snowy regions and frozen lakes.
The number of sportsmen is still too small for the poster to be aimed only at them. It is actually about seducing the most privileged classes and their most daring members in order to build a new attractive universe, rich with a prestigious social dynamic. Palaces, grand hotels, races and events for the wealthy, everything is good for the international resorts to activate the competition, to stand out and above all to find their place in this new world being forged.

Indeed, the social aspect is an important issue: only the wealthiest can afford to access this new type of tourism, and it is necessary to satisfy their taste for luxury as much as to allow them to see and be seen. It is a whole art of living that takes off, and the posters depict the grandeur of this new elegant society that takes up residence in the new palaces. They should allow the potential client to imagine daily life in the snowy mountain setting and detail the new activities available to him.
The light and the beauty of the pure and sumptuous landscapes are there, promising exceptional walks, sunrises, spas, fresh air, rest and, of course, socializing. The tourist posters with their majestic panoramas in the new blue and white tones imposed themselves in the grey of the cities, giving rise to new desires.

At the dawn of the 20th century, winter was shedding its reputation as a dead, icy and hostile season in favor of symbols of health, sport, splendor and fortune. This reversal of tourism is a socio-cultural phenomenon that has had repercussions on the entire world industry, starting with the railroads.
Indeed, this new demand never ceases to develop and thus naturally follows the expansion of the railway network. In addition, the tourist posters are not only ordered by the resorts, but also by the railroad companies such as the P.L.M.. The train is often the only way to access the mountains and its new leisure activities, so its development is closely linked to the success of this new tourist season and a new network is built at great expense to satisfy it. In 1901, Chamonix inaugurated its railroad line and the resort quickly became one of the most important in France!

As soon as a region attracts enough people to justify the investments, the summer infrastructures are adapted: central heating and electricity, creation of slopes and ice rinks... Winter sports require important and expensive installations. In particular, it was necessary to go up the slopes and for this, trains, then funiculars, then ski lifts (in the 1930s) appeared. In order to promote these facilities and equipment and thus attract skiers, the resorts used and abused advertising posters to announce their new facilities and promote their modernity. Technology is advancing rapidly and posters allow us to observe and date its incredible evolution. It is also for the historical resorts to compete with the new resorts that are built already fully equipped for winter sports. All these investments require a quick return on investment and therefore a large number of visitors, which is why advertising is continuous and the popularity of the poster quickly reaches its peak.

In addition to the infrastructure market, the market for winter sports equipment is also booming. The commercial stakes were considerable, much to the delight of advertisers and poster artists who benefited from ever-increasing budgets! We are talking about skis, sleds or other bindings, but also clothes, sunglasses, oils and sun creams or even pipes and cigarettes that were once part of the privilege of the great snow sportsman. The equipment is becoming more and more sophisticated, and the advertising and tourist posters do not fail to point this out at every opportunity.

The development of winter sports and its tourism generates a number of major developments in all areas: the birth or growth of tourism in some regions, the equipment of resorts (construction or adaptation of the hotel offer), the establishment of appropriate sports infrastructure (slopes, skating rinks, invention of ski lifts ...), as well as fashion and equipment (ski outfits, improvement of the equipment ...)

From the beginning of the 20th century, the winter season triumphed in the French, German, Austrian and Swiss mountains, especially in the Alps, but also in the Jura, the Pyrenees, the Vosges... Winter sports became an art of living that was reflected with great elegance on the posters. They invite to dream and desire, but also and especially to spend! They advertise resorts, regions or countries, but also railroads or aviation companies, skis, shoes, clothes. Tourism and advertising posters on the theme of winter sports adorned the walls of all Europe, reached Scandinavia and crossed the Atlantic to the United States and Canada, faithful messengers of a new society, reflecting its lifestyle, and marked by its ever-increasing economic weight.

For the second and last part of this article, see you in a few days!

In the meantime, you can have a look at dedicated winter sports section on our website, and if you liked this article, don't hesitate to tell us in comments and to share it :)

As always, for any information request about the original vintage posters, contact us by e-mail or by phone, we will be happy to answer you as soon as possible!